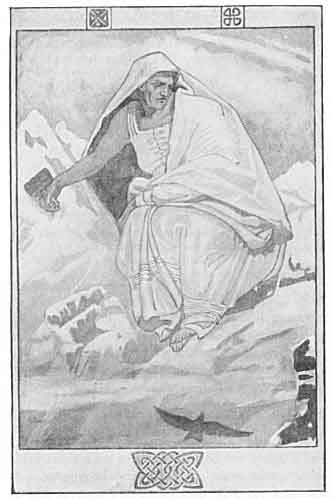 Why is my face so dark, so dark?

Out in all weathers I wander alone

According to legend, Dark Beira, the subject of this refrain, is the mother of all the gods and goddesses of Scotland. The Queen of Winter, she is ancient, angry and terrifying, her complexion dark blue, her teeth rust red, her hair as white as frost. She roams the wilds of the north, growing ever older, but never dies. Because always, at the end of winter, she drinks the magic waters of the Well of Youth which bubbles up in the Green Island of the West and grows young again. Then the whole pattern repeats in an endless cycle.

‘I don’t believe it,’ says Sam, Freya’s son in Beyond the Sea. ’Beira couldn’t grow old that quickly and then become young again. I think it’s really just a story about the seasons,’ Indeed. But nonetheless I love it.

I’m a huge fan of myths and legends – tales which, as Freya says, ‘might not be fact, that can’t be proved, but still might be something we choose to believe in.’ They are narratives which explain ancient cultures, their customs and history, their anthropomorphic approach to nature and the landscape around them. What is Beira, after all, but the creation of a people concerned by nature’s long, hard winters and relieved by the almost miraculous arrival of spring. Beira, like the harsh weather itself, rouses the dangerous whirlpool of the Corryvreckan (by washing her shawl within its waters), brings the snow (by laying her clean white shawl upon the mountains) and creates torrents that cause lochs to form (by forgetting to cover over a bubbling well).

In the western islands of Scotland, there are also many myths of the sea. They find their origins perhaps in the restlessness of the ocean currents, but are then transformed into stories of the Blue Men, who seek to sink ships in the perilous waters of the Minch, or the Maid of the Waves, who, like the tides, protect and curse in equal, fickle measure. The stories are rich and colourful, demonstrating the ancient acceptance of the supernatural in the everyday – mermaids, sea fairies and seal-folk, the magical Green Island hidden in the west, where the spirit of spring resides. As a lover of both history and myth, it is the exploration of the crossover, one into the other, that I find particularly fascinating and love to explore in my own writing – the blurred line between fiction and fact in storytelling, between what is ‘real’ and what is imagined. And that in some cases fact is indeed stranger than fiction.

As old blind Torin, a storyteller in Beyond the Sea, says ‘Just because a strange thing happens, it doesn’t mean it cannot be true. Strange things happen every day, peculiar things, odd coincidences, events that come to pass that perhaps we have dreamt about. We have more difficulty accepting these things as real. But it does not mean they are not so…’

It’s two years since my first novel, The Medici Mirror came out. Halloween was the perfect time to launch it and seems a fitting time to revisit it and tell you a little about the dark character at its heart and some of the creepy locations in which it is set. The storyline centres on the infamous sixteenth century French Queen, Catherine de Medici and her connection to an old, blackened, seemingly magical mirror, which has been passed down through the centuries leaving a trail of murder in its wake. Johnny, a twenty-first century architect, unearths this mirror while renovating a Victorian shoe factory, and all hell, literally, breaks loose. 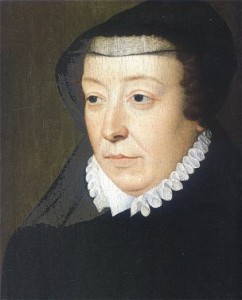 Catherine de Medici has been called the Black Queen, Madame la Serpente. She has been labelled a plotter, poisoner and practitioner of the occult. But while the stories of her villainy have been exaggerated by her successors, there is evidently some truth to them. Catherine was no doubt a skilful politician – she ruled France alongside her sons for over 30 years. Yet it is clear that if strategy failed, she did not shy away from murder. It is said that her Italian perfumer, Maitre Rene, created poisoned gloves to kill off her enemies and that on one occasion he infused an apple with deadly vapours to despatch someone on her behalf (it is said to have killed a dog by accident instead!). Also part of her entourage were the Ruggieri brothers – Cosimo and Tommaso -renowned astrologers who also practised necromancy and the black arts.

As part of my research for The Medici Mirror, I travelled to the Loire valley to visit a number of Catherine’s palaces. Blois was one of them and is the chateau where Catherine’s alleged apothecary of poisons was located – 237 secret compartments hidden behind wooden panelled walls. The cabinet room is right next to her private chapel and bedchamber. It’s a small intimate space and you can walk right around it and touch and open the panels where Catherine’s armoury of poisons were supposed to have been hidden. This inspired a chapter in my novel where Catherine, arsenic in hand in her hidden chamber, plots the downfall of one of her enemies.

I also visited Catherine’s palace at Chaumont. In this chateau it is said that a black magic ceremony was performed with a mirror to see how long Catherine’s sons would remain on the throne. It is also where other evidence of sorcery was found after Catherine vacated the premises – pentacles drawn on the floor, altars decorated with skulls, the remains of animal sacrifices. Here’s some pictures of Chaumont. 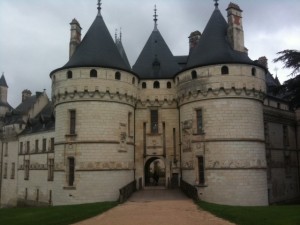 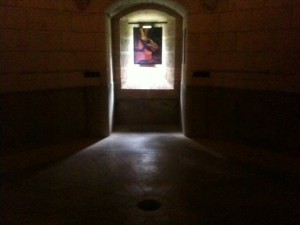 I hope that you get a sense from them of just how spooky this castle was. I found it incredibly creepy, more claustrophobic and more sinister than the others and could entirely imagine an occult ceremony having taken place deep in the cellars. It inspired a similar supernatural scene in The Medici Mirror, focusing on Catherine, the Ruggieri brothers and an act of dark bewitching. If you’re interested in reading this chapter, click here (http://www.melissabailey.info/chapter17.pdf) or visit my website (http://www.melissabailey.info) to see a video of me reading it in a candlelit, cobwebbed basement!

Whatever you’re doing on the 31st – whether you’re reading something suitably spooky at home or out trick or treating – I wish you all a very Happy Halloween!