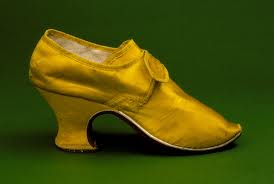 Hello and welcome to my blog. Thanks for taking the time to check it out – I really hope you’ll find things of interest here over the coming months.

I wanted to write my first post about shoes. It might sound a bit random, but as some of you know, my novel, The Medici Mirror, features an old, abandoned shoe factory which is being renovated by an architect, Johnny Carter. So, naturally, the book is peppered with references to shoes and shoemaking and I thought it would be fun to take a look at shoes through history – and specifically the development of the high heel. Besides Johnny, another key figure in my novel is Catherine de Medici, the Italian wife of French King, Henri II. She is well known as a plotter and poisoner and is famous for involvement with magic and the occult. However, her penchant for extravagant clothes and her love of fashion is less well known. Yet Catherine de Medici is often credited with the invention of the first high heeled shoe.

In 1533, aged 14, Catherine was married to Henri of Orleans. Short (at less than five feet) and hardly considered beautiful,  with her dominant Medici features, Catherine was nonetheless shrewdly aware of the powerful impression and spectacle that brilliant dress could generate. On her wedding day, she wore robes of golden brocade , a violet corsage of velvet encrusted with gems and edged 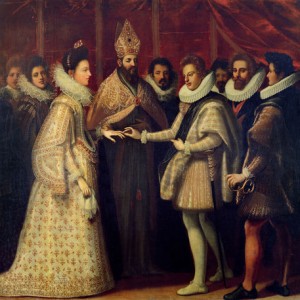 with ermine, with multiple precious stones and a crown of gold on her head.  On her feet, it is said, she wore a pair of heels created by a Florentine artisan, that gave her more stature and a fascinating sway as she walked – no doubt to attempt to captivate her largely indifferent husband and compete with his beautiful mistress.

Even if it didn’t work for Catherine, the high heel was a hit, quickly becoming associated with power and privilege. Mary Tudor, another short monarch, wore high heels in an attempt to give herself height and gravitas and from this period onwards heels were frequently in fashion for both men and women.

Louis XIV, King of France from  1643-1715, would often wear intricate heels – known as “Louis heels” – decorated with miniature battle scenes and often over four inches tall. Louis decreed that no-one could wear heels higher than his own and that only the nobility could wear heels coloured red (a precursor to Louboutin?). As heels continued to be associated with class their popularity shifted. During the French revolution, Napoleon banished high heels in an attempt to demonstrate equality. Interestingly, however, when Marie Antoinette went to the gallows, she did so in two inch heels.

The Victorian age saw the re-emergence of the appeal of the aristocratic high heel. The fashion died away again during the two World Wars and the Great Depression to re-emerge in the 1950’s. This revival was no doubt born out of a desire for glamour after 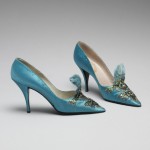 years of deprivation and sacrifice and was due in large part to French shoe designer, Roger Vivier, who is credited with the design of the first stiletto, utilising a thin rod of steel for strength. Vivier collaborated with fashion designer Christian Dior to take the high heeled shoe to new, sexy heights and created luscious opulent footwear, using silk, pearls and jewels, for customers as diverse as Ava Gardner and Queen Elizabeth II. In the 1960’s and 70’s Charles Jourdan took up the mantle of innovation, designing avant garde stilettos that were bought in excess by Imelda Marcos. They were immortalised in the surrealist photography of Guy Bourdain, a controversial figure in whose images women 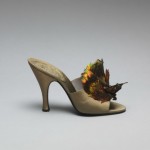 were often portrayed as supine, like mannequins, or merely sometimes as a pair of disembodied legs modelling shoes. His pictures were subversive, sinister, dangerous  – the word ‘stiletto’, interestingly, means a blade or sharp knife in Italian – and in many images it is difficult to tell if the glassy eyed women pictured are dead or alive.

With the birth of feminism, stilettos went out of favour. High heels were seen as man-made objects designed to stereotype and subjugate (who can run, or even properly walk, away from a male aggressor in such shoes?). Feminists compared stilettos to the ancient Chinese practise of foot binding where women’s bodies were moulded (and deformed) into an image of what men found feminine and attractive. Interestingly, the popularity of small feet often accompanied a resurgence of passion for heels and mutilation of one’s

Carrie Bradshaw: Doyenne of the high heel in her Blahniks

feet is not seen as too high a price to pay for capturing your own particular Prince Charming – after all Cinderella’s sisters actually cut off their toes to fit their feet into her lost slipper.

More recently, the view that women can derive pleasure and indeed power (rather than oppression) from high heeled shoes has become more widely acceptable. Women have reclaimed the heel as a symbol of height and authority and designers like Jimmy Choo and Manolo Blahnik have lucratively ridden this new tide of female obsession. But it certainly is an obsession for some – those who have very publicly gone under the knife to reduce the size of their feet to fit into the ‘perfect’ pair of shoes. Each to his own.  But the mutilation still clearly continues.

‘I have heard, but not believed, the spirits of the dead may walk again.’

When architect Johnny Carter is asked to redesign a long-abandoned Victorian shoe factory, he discovers a hidden room deep in the basement. A dark, sinister room, which contains a sixteenth-century Venetian mirror.

A love in danger

The Medici Mirror by Melissa Bailey

Johnny has a new love, Ophelia, in his life. But as the pair’s relationship develops and they begin to explore the mystery surrounding the mirror, its malign influence threatens to envelop and destroy them.

The mirror’s heritage dates back to the sixteenth century, and the figure of Catherine de Medici – betrayed wife, practitioner of the occult, and known as the Black Queen.

If you are looking for a dark story, a side helping of jealousy, the obligatory love story that stands the test of time and a good twist then The Medici Mirror is the book for you. As many of you know I’m not one for love stories in literature – give me an old fashioned rom com movie any day – but this story intrigued me and I wanted to give it a go after seeing the book jacket. It kept me interested throughout and when the reveal came at the end I was suitably impressed, I hadn’t seen it coming!

The one thing that stood out for me was the writing. Melissa Bailey is a wonderful talent, the words flow and the story is beautifully crafted, it’s hard to comprehend that this is the work of a debut author. The narrative allowed me to feel part of the story and to lose myself in the sinister and beguiling powers of the mirror and those it ultimately affects.

The author effortlessly takes us back to the reign of Henri II but it’s his wife Catherine de Medici that really stands out, for me she steals the show and is without question the main character in the book – I cared more for her than Johnny or Ophelia who represent the modern era. A woman fighting for her position and her life, her insecurities literally jump off the pages and her desire to bring down her husband’s mistress – one of many – palpable.

Having said that, I would have liked a tighter relationship between Catherine and the mirror. I wanted to know why and how the mirror had developed such a sinister and dangerous aura. We never find out and this was a disappointment for me.

The author cranks up the tension gradually and you never quite know what to expect from one chapter to the next. Johnny Carter’s personality evolves throughout as he succumbs to the hidden and seductive powers of the mirror. This is a dark and atmospheric book, the scenes in the abandoned shoe factory are evocative and completely draw you in to an era gone by. Talking of which, I really enjoyed the time spent trying to discover how the previous owner of the factory had died. Was it natural causes or cold blooded murder?

For a magnificent and atmospheric blend of old and new, past and present along with the odd death thrown in for good measure The Medici Mirror will not disappoint.”

In the autumn I had fun with film maker Steve Hoskins putting together this short film  about my debut novel. I had the chance to explain my motivations for writing the story and to share some of the places in London that inspired me.