A lot of people have asked me whether I visited the Hebrides while I was writing Beyond the Sea, set on a tiny (fictional) island off the coast of Mull, in the Western Isles of Scotland. The answer is yes. I love visiting the places I write about, to experience the mood and landscape first hand, to absorb the atmosphere. I find it easier that way to bring it to life on the page.

Very soon after I started writing the book, I found myself on a ferry leaving Oban (in mainland Scotland) for Craignure on Mull. The day was chilly and overcast, more like winter than autumn, and dark cloud hung low in the sky. Before long it was raining and a cold hard wind whipped me as I stood on deck, looking down at the churning sea, getting drenched but refusing to go inside. 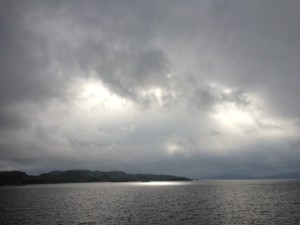 As the ferry advanced up the Sound of Mull and we passed Duart Castle in the south east corner of the island, I remembered from my research that the Swan, a Cromwellian warship, had sunk at this exact spot on 13 September 1653 – almost 360 years ago to the day. I began to think of shipwrecks and sailors and letters in bottles and another strand of the plot began to emerge. It was an exciting day for me and one that remained imprinted firmly in my mind. This journey, made in 2013, is the same one taken by Freya in Chapter 1 of the novel. 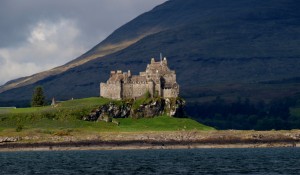 I travelled all over Mull that autumn, circling the whole island on its single track roads, past the fragile beauty of the grassy machair, the towering grandeur of Ben More. 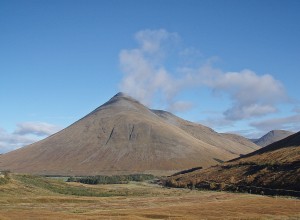 I watched sunshine break over Loch Scridain, turning its seawater brilliant blue, then saw it transformed to dull grey when the mist rolled in later that day.

I drove to Knockvologan on the south of the island, waited until low tide, and then crossed the exposed white sand beaches of the tidal island of Erraid (the setting for Robert Louis Stevenson’s Kidnapped). I trekked past the now abandoned lighthouse keepers’ cottages and tried to imagine what it would be like to live on a tiny island like this, isolation complete when the sea rolled back in. 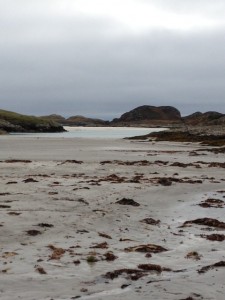 I looked out across the vastness of the ocean and caught sight of the shadowy lighthouse, Dubh Artach, floating on the horizon, somewhere between land and sea, a mirage perhaps. 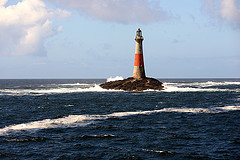 I travelled far and wide, looking, thinking, jotting in my notepad. I wanted to remember the sights, sounds and smells, the colours and tones of the landscape. I wanted to remember my smallness in the face of all this immense Hebridean beauty. And I wanted as much as possible to echo it faithfully in the narrative of my book.

It’s become clear to me over the years that a lot of people (or most of my family at least!) have little idea what being a published author actually means. When I got my book deal from Arrow back in 2012, my family were divided between those who assumed that I would now be dashing out bestsellers every few weeks and comfortably making millions (Auntie Thora) and others who assumed I’d make less than no money and that it’d take forever (Uncle Frank).

I hated to disillusion them – well, Auntie Thora anyway, who I was secretly hoping might be right. But the truth, as ever, lay somewhere in between. So, much as I love myths, I thought I’d dispel a few of the favourites.

It generally takes more than a handful of days to write a novel.

A lot of fiction writers need at least a year to produce a book and it takes me a little longer. Now, of course, there are exceptions to this. Kazuo Ishiguro famously dashed off The Remains of the Day during a four week “crash”. Oh yeah, and probably made millions from it. But that’s far from the norm. A handful of writers do extremely well (I’m thinking JK Rowling, EL James, John Grisham, James Patterson). A good number do well enough to write full time. But the largest proportion, including myself, work part time to supplement the money they make from their books.

However, I don’t think it’s ever quite as bad as Uncle Frank had imagined. I remember him asking me when he came to visit once if we’d had to re-mortgage the house to give money to the publishers (about £50,000 he seemed to think). Slightly taken aback, I explained that that wasn’t quite how it worked – that the publishers in fact paid me an advance so that I could spend time writing. They then recovered that from the profits of the book, and were entitled to far greater profits than me because they were the ones taking the risk. Uncle Frank looked genuinely shocked. I’d obviously dislodged some long held view of the way things worked.

When I showed him the study where I write, he went on to voice what I think is a more commonly held view. ‘Ah, so this is where you sit and wait for inspiration!’ I nodded and laughed, not wanting to disabuse him again. But it doesn’t really work like that either. Contrary to what most of my family think, I am not generally found wandering around my house in a kaftan, sipping on mint juleps and waiting for the muse to strike. More’s the pity. I’d love to be doing that on a daily basis. But instead, I am found in that same study, tapping away, trying hard to improve my writing.

In short, being a writer is much like any other career. The longer you do it, the better you become at it. You have to slog away – the breakthroughs come because you’re working hard, not because you’re waiting for moments of genius to descend. There are deadlines and pressures – just like any other job. It’s a tough and uncertain career. Time is spent agonising over whether people will like your book or whether in fact anyone will buy it at all! And it can be lonely, stuck in your own head for so much of the time. But that’s where the joys of social media come in. Through it I’ve met so many lovely authors and fabulous book bloggers who provide a huge amount of positivity and support.

All things considered, the good, the bad and the ugly, I love being a writer. And I wouldn’t change it for the world.